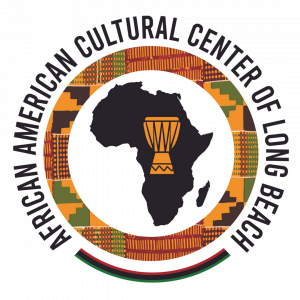 Black Power! Takes the viewer back in time through photos, videos, and written material, to the original concept of the Black Power Movement, beginning in 1966, following the Civil Rights Movement. Exhibits explore the growth of the Movement, and grassroots organizing in poor communities throughout the country, and beyond.

See a replica of the counter sit-in, learn about the life of Rosa Parks and the Freedom Riders.

We also pay honor to whose lives were taken, the Black Lives Matters Movement, and the recent mass shooting in Buffalo, NY.

For more information on scheduling a group or private tour, contact our office at 562-426-2670 or email the AACCLB at admin@aacclb.org.

The African American Cultural Center of Long Beach is currently located at the Expo Arts Center at 4321 Atlantic Ave.

The vision for this exhibit is to educate, honor, and excite. We want to educate people about our military history and the role of African American soldiers who served. People today won’t know the trial and tribulations that went on in the military or have even occurred in our everyday life. We want to teach kids today that’s it’s about progression, not regression, and seeing all these (artifacts) up close can help people today learn from history’s past mistakes.

On October 25, 1940, Benjamin O. Davis Sr. was appointed Brigadier General in the United States Army by President Franklin D. Roosevelt, becoming the first African American general in the history of the United States Military. Since then nearly 400 other African American women and men have been appointed to that rank. The highest rank in the Army, Air Force, and Marine Corps is General (four star), followed by Lieutenant General (three star), Major General (two star) and Brigadier General (one star). Five men have held the rank of General of the Army
(five star), George C. Marshall, Douglas MacArthur, Dwight D. Eisenhower, Omar Bradley, and Henry H. Arnold, who later became the only five-star general in the Air Force. The five-star rank is no longer attainable.

No African American has yet attained the rank of General in the Marine Corps.

Our hours vary; please call or email us to schedule an appointment.